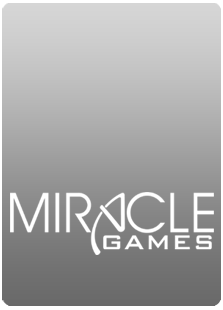 Duel Decks contains two 60-card decks developed specifically to be played against each other.
Duel Decks are not produced anymore and have been replaced by Challenger Decks. 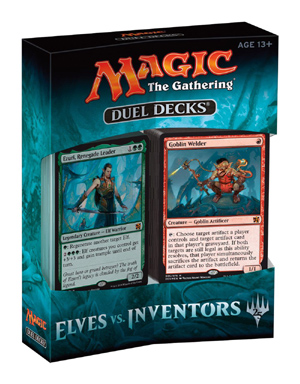 Duel Decks: Elves vs. Inventors
For the final Duel Decks release, Elves rally together and call upon the raw power of nature to crush the inventors who seek to evolve beyond nature with their artifice technology.


Includes two ready-to-play sixty-card decks that were designed to be well-balanced, making it a great purchase for players who are short on time but want a fair, head-to-head experience. 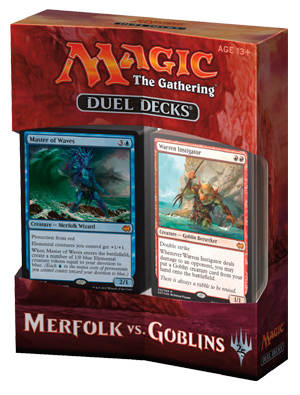 Merfolk vs. Goblins pits two of the most recognizable tribes in the history of Magic against one another. Will your players side with the reckless and wily goblins or the graceful and cunning merfolk? 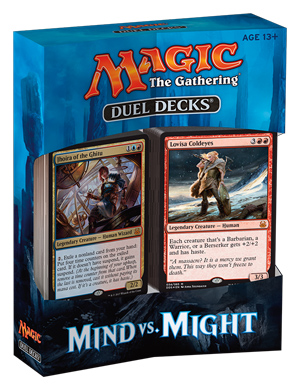 
Mind vs. Might represents the age-old clash between mages and warriors, brains and brawn. Clever plots or raw power-which will you choose? 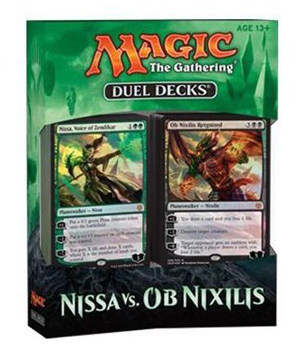 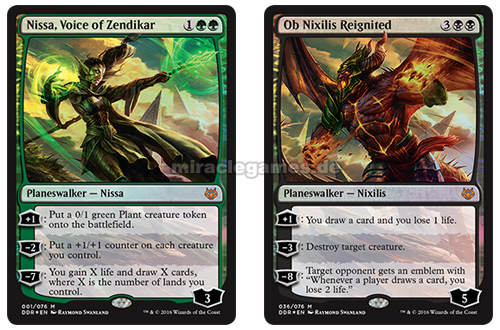 Planeswalker Nissa Revane gathers her forces to protect Zendikar from annihilation. Drawing on the power of the land itself, she summons mighty Elementals to overwhelm her foes.

Trapped on Zendikar for centuries, the demon Ob Nixilis will do anything to reignite his Planeswalker spark and escape. He summons terrifying Demons and wields dark, destructive powers to lay his enemies to waste.

The stakes are high as Nissa and Ob Nixilis fight to control the power of the Khalni Heart. Who will prevail? 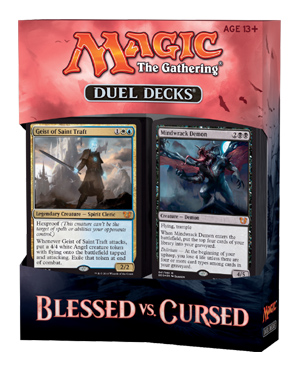 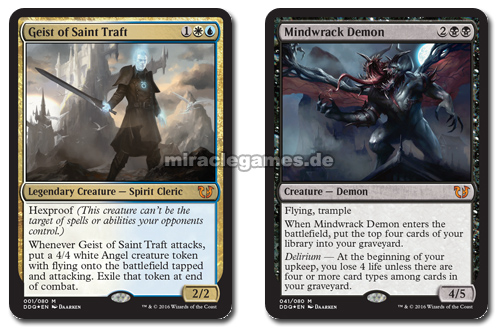 A divine mission has once again united the Humans, Spirits, and Angels of Innistrad. Together, these protectors will stand against the shadows, fighting for humanity´s salvation.

Evil rules the night. Shambling hordes of the dead roam free, their cemetery gates in ruins, as powerful Demons soar overhead. The fate of the living remains shrouded in darkness.

Will you defend hope or snuff it out? 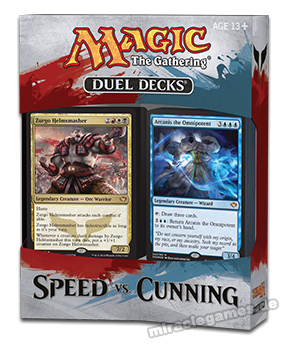 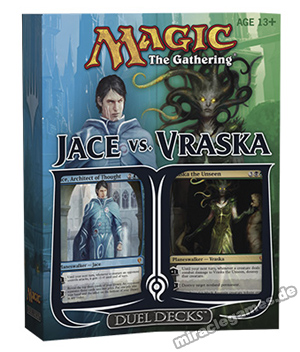 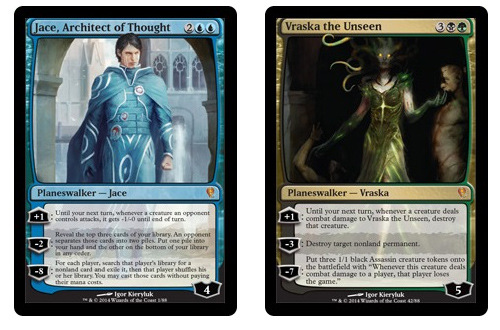 Planeswalker Jace Beleren is a gifted mage who specializes in illusion magic, mind reading, and memory modification. He is driven by an obsessive thirst for knowledge, and he has unlocked many secrets of the Multiverse in his travels.

The gorgon Planeswalker Vraska is Ravnica's master assassin. She is most often employed by the Golgari guild, but she'll accept any job that catches her interest - usually the ones that yield the most interesting trophies for her collection. 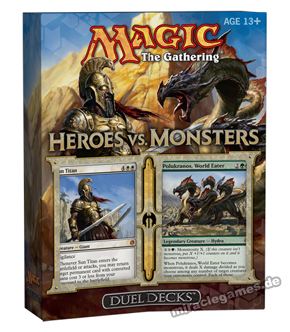 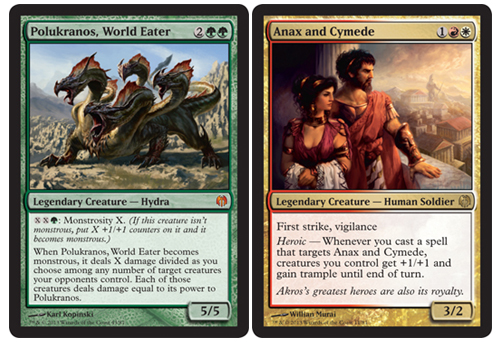 Monsters worthy of legend have always threatened the civilizations of the Multiverse. Heroes of many worlds must prove their worth by confronting these immense creatures. These heroes grow stronger with every encounter as they assail threats beyond their imagination.

Materializing ouf of the mist, monsters loom large on the horizon. Terrifying and relentless, these mystical creatures ravage the countryside. Enrage your monsters into jaw-ping monstrosities and send them rampaging toward the enemy.

Catch a glimpse of the world of Theros while experiencing the epic struggles of this eternal conflict. 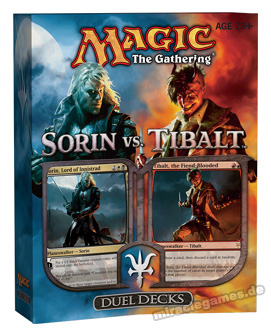 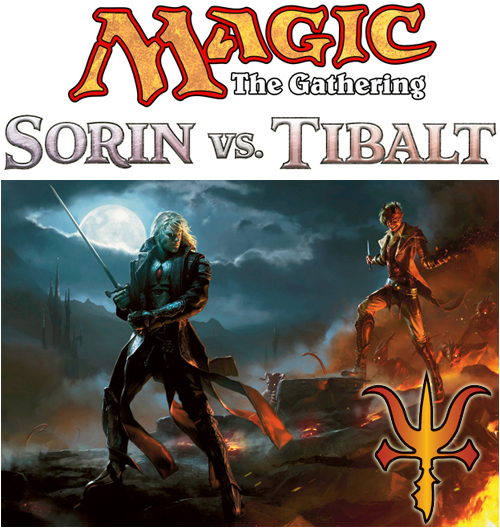 On the world of Innistrad, humans have always been pawns. For the mighty vampire families, humans are the source of blood and the foundation of their power. For the werewolf packs, humans are prey. For the ghouls and g of the plane, humans are reminders of lives gone by, the despised living to be hunted and terrified. And for demons and devils, humans are targets for their hatred and torment.

Sorin was among the first generation of vampires created on Innistrad. He saw how his kind spread over the plane, feeding on and ultimately diminishing the populace. He argued for restraint, but the other vampire families resented his intrusion. Unknown to his kin, however, Sorin was a Planeswalker. He traveled the Multiverse searching for a solution to the grave situation on his home plane. Ultimately, he created the archangel Avacyn, a protector that would watch over the humans of Innistrad and serve as the symbol of hope. Thousands of years later, Innistrad is still afflicted with monstrous creatures, but thanks to Sorins intervention, the Avacynian Church continues to lend its protection to the worlds humans.

The fiendish mage Tibalt was born human, but immediately showed a predilection for inflicting pain. When a dark invocation caused his essence to be merged with infernal devils of Innistrad, his Planeswalker spark was ignited. He was free to traverse the Multiverse looking for new unfortunates to torment, but the innocent people of his native Innistrad were always his favorite victims.

Sorin, with his long-sighted, vampiric perspective, knows that humanity may lose its tenuous grip on survival if Innistrads monstrous forces hunt too recklessly. The young pain-mage Tibalt, on the other hand, respects no authority but his own vicious whims. As they clash, neither will tolerate anything but the utter defeat of his foe. Who will prevail is up to you. 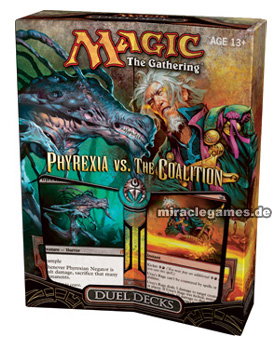 Duel Decks - Phyrexia vs. The Coalition 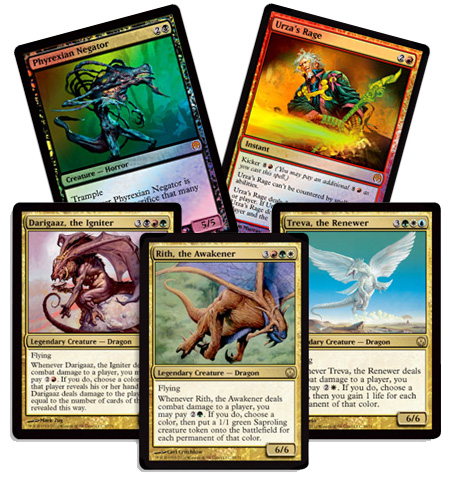 The overlay of the Phyrexian plane of Rath has unleashed a scourge upon Dominaria. Single-minded and unyielding, the Phyrexian army uses the power of black mana to fuel efficient killing machines that seek to eliminate all in its path.

For Dominaria, victory is the only option. The Coalition, representing the five colors of mana, has united under the leadership of Gerrard Capashen to combat the Phyrexian invaders.

When the opposing forces wage war, devastation can be the only outcome. The question then remains, will you stand?


Duel Decks-Phyrexia vs. The Coalition 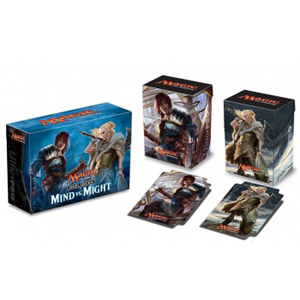 Our parcels are delivered by DHL:

Other countries outside EU

Please send an email to order@miraclegames.de

Miracle Games is an online-shop offering the trading card game Magic: The Gathering by Wizards of the Coast. In addition to a wide range of Magic singles we also offer sealed MTG products like booster packs, decks, bundles and accessories.

Magic the Gathering (TM), manasymbols, Tap-Symbols, ´´Tapping´´, as well as all expansion names and symbols
are registered trademarks of Wizards of the Coast LLC, a subsidiary of Hasbro, Inc.